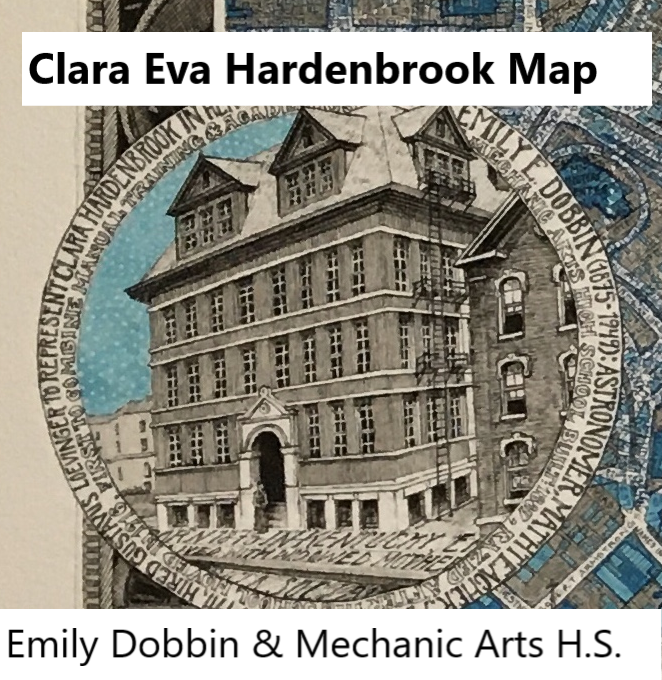 In researching Clara Eva Hardenbrook for Ramsey County Historical Society’s upcoming exhibition Persistence: Continuing the Struggle for Suffrage and Equality, 1848-2020, I encountered the mysterious Miss Emily E. Dobbin. Born in 1875, she was a University of Chicago-educated astronomer who taught math at the Mechanic Arts High School in Saint Paul, MN. She was an active suffragist and served as President of the Minnesota Woman Suffrage Association (MWSA) from 1910 to 1911.

At the MWSA convention in the fall of 1911, Dobbin was a polarizing figure. She sparred over issues with the eventual president-elect Mrs. A. T. Hall, splitting the convention-goers into two opposing factions as Dobbin refused to seek reelection in protest. (https://documents.alexanderstreet.com/d/1009656643)

Woman Suffragists Clash at Election Sun, Oct 8, 1911 – Page 14 · Star Tribune (Minneapolis, Minnesota) · Newspapers.com describe the bitter clash between Emily E. Dobbin and Mrs. A. T. Hall, but the article doesn’t give a modern reader a clear understanding of the topic of debate. An educated guess: at the time, the suffragist camps were divided between the American Woman Suffrage Association that believed success could be more easily achieved through state by state campaigns and the NWSA who focused on a federal constitutional amendment. Emily E. Dobbin left the MWSA with something more local in mind.

In 1914, Dobbin was the architect of a lawsuit Clara Eva Hardenbrook vs. the City of Saint Paul. Minnesota gave women a limited right to vote for elections such as school and library boards. Minneapolis allowed women that vote, but Saint Paul circumvented the issue by making the school board an appointed position. Dobbin intended to challenge Saint Paul’s practices. She identified Clara Eva Hardenbrook, a middle-class house wife with no apparent ties to any pro-suffrage groups. Hardenbrook attempted to vote and was escorted out of the polling place. Dobbin hired the attorney, Gustavus Loevinger, to represent Hardenbrook in her suit against the City of Saint Paul, arguing that because women were denied the vote, the city’s entire election should be deemed anti-democratic and the results thrown out.

Five Ramsey County district judges denied the motion en banc, but not before the topic garnered considerable media attention and speculation regarding an intervening lawsuit brought forward by some businessmen with questionable motives. Efforts to appeal to the Minnesota Supreme Court were denied.

What is mysterious is how Dobbin financed the lawsuit and what was the connection to the businessmen? What was the extent of her involvement? Why are there no photos of Dobbin?

Census and teacher directories record Emily living with her mother, Julia, in various apartments around Saint Paul from 1912 through 1922. Julia had met her husband, a physician who owned a drugstore and raised a family in Louisville, Kentucky. Her mother was widowed in 1883 and accompanied her daughter to Saint Paul and then California. Julia passed in 1923. Emily lived in San Diego, CA and worked as a real estate broker. She passed away in 1949.