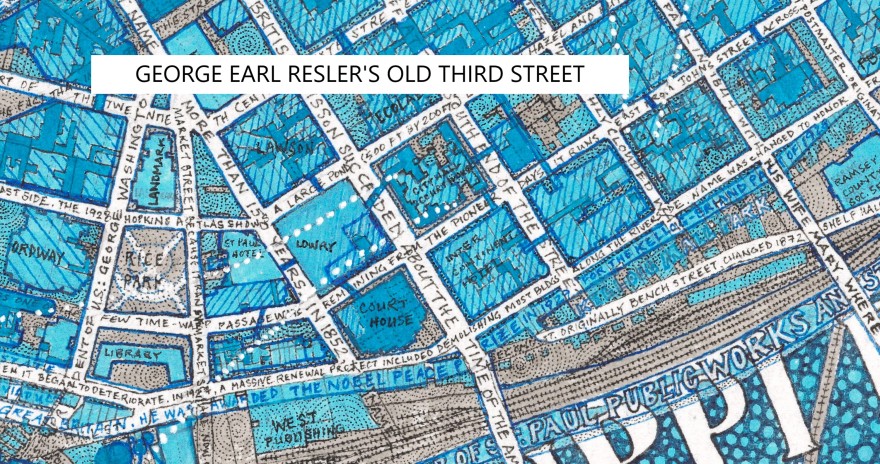 Third Street was Saint Paul’s main business thoroughfare up into the 1880s, when it began to deteriorate. Its buildings, occupants, and customers became progressively more shabby and neglected. In 1927, the city began a massive renewal project which included demolishing most of the the buildings on the river side of the street. In 1932, the street was renamed Kellogg Boulevard to fireworks and a parade. (Referenced from Donald L. Empson’s The Street Where You Live.)

George Resler’s critics complained that his etchings were not a fine advertisement for the city of Saint Paul, writing to the editor of the Pioneer Press in 1912:

Back alleys, the rear of broken down buildings and much of the dilapidated out-of-door furniture we have in St. Paul has furnished material for a series of etchings by a young St. Paul artist which etchings are now on exhibition at the St. Paul Institute. It may be that there is a special beauty in a pile of dirty straw or an ash barrel which has outlived its usefulness. It may be that there is more beauty in round-shouldered buildings which, but for the structures on either side of them, would most certainly topple over on to the ground and probably dissolve into dust.

The same thing that art critics and city planners failed to appreciate in the beginning of the twentieth century is what makes George Resler’s etchings so precious today. A glimpse of a pedestrian-friendly, mixed-use downtown Saint Paul that is unrecognizable today.

I first ran into George Resler’s art by way of research for the map drawing I am working on for Phalen Creek. All photos of Swede Hollow appear to be taken from the streets above, but George Resler climbed down the stairs, interacted with the residents, and recorded the feeling of looking back up.

The Minnesota Historical Society’s digital archives have an amazing collection of George Resler’s prints. Below is the Landmark Center with a very different water front.